[This is the 3rd in a multi-part series titled "On the Forensic Trail".  My goal with this series is to introduce my PowerShell Forensics module called PowerForensics, and the forensic artifacts that it parses.  This post covers the Guid Partition Table (GPT), an alternative hard disk partitioning scheme to the Master Boot Record, and how to use PowerForensics to inspect it.] 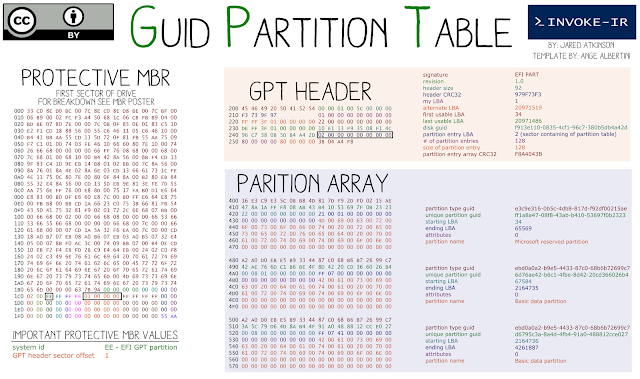 As United Extensible Firmware Interface (UEFI) begins to replace legacy BIOS firmware interfaces, we will see the rise of the Guid Partition Table (GPT) as a replacement for the Master Boot Record.  The UEFI Specification requires that all compliant firmware supports the GPT partitioning scheme, so GPT will begin to become more common as UEFI is implemented by vendors.  That being said, the GPT partitioning scheme is not unique to UEFI, as it is also supported by many modern BIOS systems.

This post explores the Guid Partition Table data structure, and focuses on how PowerForensics can be used with it.

1)  Logical Block Addresses (LBAs) are 64 bits (rather than 32 bits) increasing the maximum partition size from 2 TiB to 8 ZiB.
2)  GPT supports many partitions (rather than just four primary partitions).
3)  Provides both a primary and backup partition table for redundancy.  Two GPT Header structures are stored on the device: the primary and the backup. The primary GPT Header must be located in LBA 1 (i.e., the second logical block), and the backup GPT Header must be located in the last LBA of the device.

GPT Data Structure
Protective MBR
When a disk is formatted with a GPT disk layout, a Protective MBR is located at Logical Block Address (LBA) 0.  The Protective MBR is used to provide compatibility with legacy tools that do not understand the GPT format.  The Protective MBR is functionally equivalent to a normal or "Legacy" MBR, but only has one partition.  The first/only partition will be of type 0xEE (EFI_GPT_DISK) and reserves the entire disk starting at LBA 1 for the formal Guid Partition Table structure.

It is worth noting that the MBR Boot Code (the first 440 bytes) is not executed by UEFI Firmware. 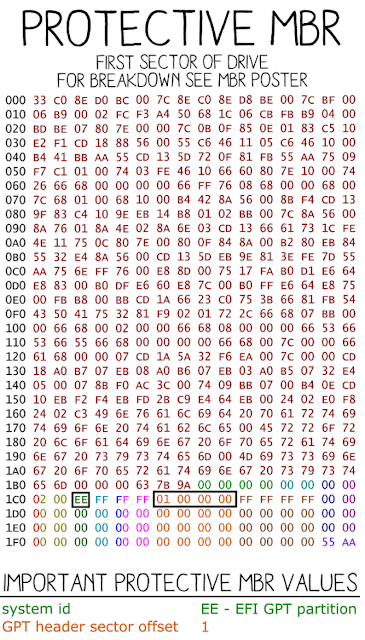 In the example below, the Get-MBR cmdlet is used to display the MBR Partition Table of a GPT formatted disk.  The output shows that there is one EFI_GPT_DISK partition that starts at LBA 1 (the sector immediately following the Protective MBR) and ends at LBA 4294967295 (or 0xFFFFFFFF which represents the entire disk).

GPT Header
The GPT Header describes the logical layout of the disk as a whole.  The location of the GPT Header  is described by the MyLBA value and should always be 1, while the AlternateLBA value points to the backup GPT and will always be the last sector on disk.  It contains the DiskGUID, which is used to uniquely identify the disk, and CRC32 values which are used by firmware to detect corruption of the GPT itself.  If the GPT is corrupted, the original GPT will be replaced with the backup GPT.  The FirstUsableLBA and LastUsableLBA values define the portion of the disk that is not reserved by the GPT and therefore can be used by the partitions.  Lastly, the header provides us with details about the Partition Array itself.  The PartitionEntryLBA value points to the start of the array, and its overall size can be derived from the NumberOfPartitionEntries and SizeOfPartitionEntry value.

PowerForensics Cmdlets
PowerForensics currently has three cmdlets that deal specifically with the GPT (Get-GPT, Get-BootSector, and Get-PartitionTable).  This portion of the post will explain the cmdlets and go through a few example use cases.


Get-GPT
Get-GPT is a cmdlet that parses the GUID Partition Table data structure contained within the first few sector of the device specified.  Get-GPT requires the use of the -Path parameter which takes the Win32 Device Namespace (ex. \\.\PHYSICALDRIVE1) for the device from which the GPT should be parsed.

NOTE: Since making Get-BootSector, I rarely use the Get-MBR or Get-GPT cmdlets, but have kept them in the module in case anyone finds a reason for them. 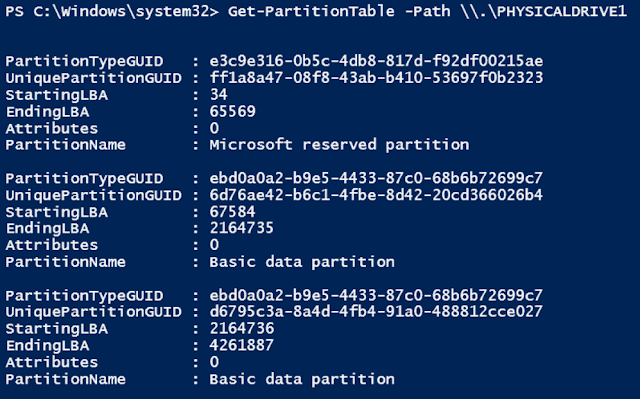 References
UEFI Specification
Posted by Unknown at 7:02 AM